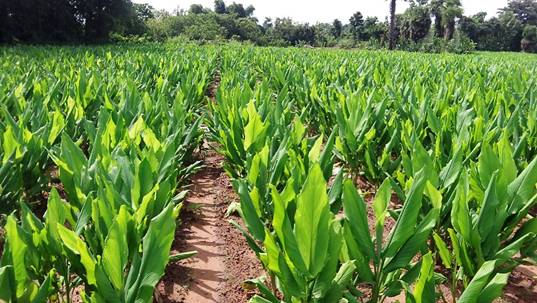 Turmeric, known as Haldi in Hindi, is a popular and sacred spice from India. It is nicknamed as ‘Indian Solid Gold’ and ‘Indian Saffron’ owing to its golden yellow color. Turmeric has been used in Asia for thousands of years and is a major part of Ayurveda, Siddha medicine, traditional Chinese medicine, Unani and the animistic rituals of Austronesia peoples. Although long used in Ayurvedic medicine, where it is also known as haridra, no of high-quality clinical evidence exists for use of turmeric or its constituent, curcumin as a therapy. It was first used as a dye, and then later for its supposed properties in folk medicine. It has profound significance as a condiment, dyeing agent, flavoring agent and even as a medicine. It is an inseparable ingredient in Asian cuisine especially in Indian curry preparations. A by-product of turmeric is ‘kumkum’.

Botanically called Curcuma longa, turmeric belongs to Zingiberaceae family- the same family as ginger. It is the rhizome or the root that is used for various purposes mentioned above. Turmeric plant grows from the rhizome and the leaves are broad, long and bright green in color. The plant does not have a well-defined stem. It is a pseudostem which is shorter than the leaves. The flowers are pale yellow and are borne on spikes.

Generally turmeric is ready for harvesting within 7-9 months. Typically, it is ready when the leaves turn yellow in color.

Important information about the plant (per Acre)

Turmeric needs a warm, humid climate for growth. It grows in hilly areas at an altitude of 1500m from sea level. The ideal temperature ranges between 20-30 ⁰C and the rainfall needed is 1500 to 2250 mm per annum for turmeric cultivation in India. It can also be grown as an irrigated crop.

Clayey soil with a large amount of humus is best for growing turmeric. It can however also grow in sandy soil that is well-drained. Other types of soil that is suitable for turmeric cultivation are red soil, ashy loam or light black soil. In other words, any type of loamy soil, with natural drainage system is good for turmeric plantation. The water must drain off and not stagnate at the place. In addition the soil acidity must be neutral. Alkaline or acidic soil would harm the rhizome of turmeric plant and it cannot grow.

In case you are cultivating it for the first time then you can buy them from the market or local agricultural body. If you are opting organic growth of turmeric, you must collect seed rhizomes from organically cultivated farms. For commercial production, high yielding varieties such as Suguna, Krishna, Sudarshana, Sugandham, Roma and Ranga can be used. Both mother as well as finger rhizomes are used for sowing purposes. The mother rhizomes can be sowed in whole or split into two with each having a complete bud. The finger buds are cut into long pieces of 5cms each.

The turmeric seeds are often kept beneath moist straw and left for sprouting before sowing. The planting time in India, is typically just after the pre-monsoon showers. This period varies from state to state. For example, it is around April in Kerala, May in parts of Maharashtra, Karnataka.

Turmeric is a plant that needs lot of manure for growth. Hence, the rhizomes are covered with rotten cattle manure and then sowed. They can also be covered with Trichoderma mixed compost. Powdered Neem cake is mixed with soil and is applied in the pits prepared for sowing. Approximately, 1000kg rhizomes are needed for planting in one acre of land.

Depending on the variety, turmeric is ready for harvest within 7-9 months of sowing. While the aromatic ones mature in 7 months, the intermediate variety takes 8 months and the late variety 9 months. They are ready for harvest when the leaves and stem start turning brown and dry up progressively. Once dried, the land is ploughed and the rhizomes are extracted. The extraction can be done by hand-picking or carefully lifting the clumps with a spade. The stems are cut an inch above the rhizomes. In order to clean them from mud and other extraneous matter, the rhizomes are washed and cleaned thoroughly. The finger rhizomes are then separated from the mother rhizomes. The mother rhizomes are stored as seed rhizomes for the next cycle. The finger rhizomes are then cured to extract turmeric.

Curing turmeric is a lengthy and challenging process of turmeric production. Challenging because if not done properly the turmeric may not be extracted upto its full capacity. Also care must be taken to see to it that no chemicals are used for processing.

The rhizomes are boiled in water and kept for sun-drying.

Within 2-3 days of sun drying, the rhizomes are again boiled with just enough water to soak them. This boiling is done in copper or earthen vessels. They are boiled till the rhizomes become soft. Some farmers cook in perforated baskets.

The cooked rhizomes are taken out of the pan and water is allowed to drain off from the turmeric back into the pan. This water can be reused for cooking the next batch of harvested turmeric rhizomes. Usually the mother and finger rhizomes are cured separately.

Once cooked, these rhizomes are spread under the sun on cement floor. Sometimes bamboo mats are used. While they are spread on the floor during daytime for sun drying, they are heaped together and covered at night so that no moisture affects the turmeric. This step lasts for 10-15 days. In case of artificial drying, cross-flow hot air at 60°C is used.

Dried turmeric has a rough dull color on the scales. The outer surface is polished and smoothened out to improve the appearance. In case of manual polishing, the finger rhizomes are rubbed on hard surface. An improvised technique is to use hand-operated barrel mounted on a central axis. The barrel is filled with rhizomes and rotated. They get polished by mutual rubbing against each other and abrasion against the surface.

The essence of turmeric for a buyer is its color. Therefore, in a bid to attract the buyers, a suspension of turmeric in water is added to the polishing drum during the last ten minutes. This helps the rhizomes get uniformly coated. After this, the rhizomes are dried under the sun.